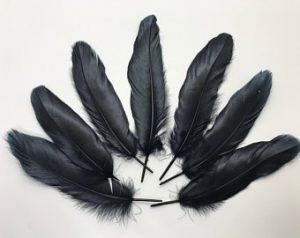 Cemani farms can be a great opportunity for ornamental chicken breeders since ayam cemani is on the high demand right now.

This Indonesian chicken is not only popular in its native but also in other countries. So, what actually makes it so popular?

Ayam cemani has many physical differences if we compare to other chickens in general.

If other chickens usually have colorful feathers such as black, white, orange, red, or grey, this chicken only has one color, the most exotic and beautiful color, jet-black.

Not only in its feathers but also in the whole body including ayam cemani meat, bones, even the internal organs.

This is what makes ayam cemani is so popular.

Is There Any Part Of Cemani Chicken Not Black?

Even though ayam cemani is black inside outside, but there are some part of this chicken which is not black.

If you are going to run cemani farms business, you must know this.

Many people believe that ayam cemani has black tongue. However, it is not completely right.

So far we are in the cemani farms field, we have never found cemani chicken with totally jet black tongue.

If it is black, it is not really jet black. Commonly, ayam cemani’s tongue is very dark in gray color so that sometimes it looks like black.

But if you pay attention more closely, you will see that it is dark grey. Nevertheless, there is also ayam cemani with white or pink tongue.

Don’t worry about it. Nothing goes wrong there.

The second part of this gothic chicken which is not black is the blood. Indonesian people often relate ayam cemani with magical powers.

Many people believe that ayam cemani has black blood which is then used as the media to get powers.

So, they often sacrifice this chicken for religious or ritual purposes.

However, what is the color of cemani’s blood? It should be dark red, not black.

This is what you should know before doing cemani farms business.

Cemani chicken is like the general chickens that lay cream-colored eggs. You probably can find brown-colored eggs of cemani.

So, it is totally wrong if you think ayam cemani eggs are black.

The customers are interested to Ayam cemani starting from the eggs, the chicks, until the adults.

But the highest demand is the adults which are ready to reproduce.

Breeding ayam cemani at this point is suitable if it is going to be raising although it doesn’t rule out the possibility of raising them start from the eggs or chicks.

Raising ayam cemani chicken indeed is quite beneficial. For ornamental chicken lovers, getting this unique chicken will be a pride and satisfaction.

As in some places, ayam cemani for sale can reach a fantastic price so that they will be very satisfying to have it.

Meanwhile, for ornamental chicken breeders, running cemani farms business will be absolutely profitable when they are successfully selling cemani chicken.

Just imagine what you can sell from this chicken.

1. First, you have  ayam cemani eggs for sale.

There are some people who want to get ayam cemani eggs to be hatched by their-selves so that they can know the process of keeping and taking care of it from the eggs until the adult.

Even, there are also some people looking for eggs for consumption purpose.

2. Second, you have ayam cemani chicks for sale.

You know that people are also interested to get cemani chicks.

Maybe they want to keep it from the chicks without having to hatching the eggs so they choose to get ayam cemani chicks for sale.

3. Third, you have ayam cemani for sale when they have reached certain ages.

For example the age of 3 months, 5 months chicken, or even the adults.

When you are able to fulfill all of your customers’ need, of course having cemani farms will be so profitable for you!

4. The last, you have ayam cemani meat for sale.

Similar with the general chicken, ayam cemani can also be consumed.

Although it is an ornamental chicken, but there are some people who are interested to consume the  black meat of this chicken.

Of course, this is not without reason. The black chicken benefits which are so abundant has made people interested to consume it for health purpose.

Considering the price of ayam cemani which is high, do you think you are able to consume it?

Well, due to the tempting price and the numbers which are increasingly scarce, some people try to cheat by selling fake cemani chickens.

They claim it is pure cemani chicken but the fact is not so. However, there is no need to worry.

There are some characteristic of cemani chicken which can show the its purity.

So, How To Know The Characteristics Of Pure Ayam Cemani?

The following is a list of the characteristics of the pure cemani chicken based on our experience in the cemani farms field:

Ayam cemani’s beak is black. However, the more adult the chicken, the more fade the color does.

It happens because the beak is used to peck food.

But don’t worry, the color that fade only at the tip of the beak.

Similar with the feathers, the skin of cemani chicken is also black.

It is almost 100% black. Meanwhile, the fake cemani chicken will not have black color skin until that persentage.

Not only the skin, ayam cemani’s rectal is also black.

From this phenomenon, it can also be known accurately because other types of chickens don’t have the black rectal.

The outside parts of cemani chicken are black, including the feet. Generally, ordinary chickens have yellow or white legs.

The black color on cemani chicken is not really jet black. As we know that chicken feet are scaly so that the color fades a little.

The feet’s color can also be said dark grey.

Well, cemani farms really can be a great opportunity, right? You have known important information about this chicken that you can use as the consideration before doing cemani farms business.

So, find other interesting information about cemani chicken in our website. Happy reading!

2 pemikiran pada “Cemani Farms : What Should You Know About Ayam Cemani Before Doing Cemani Farms Business”