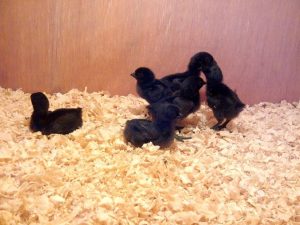 When you are trying to breeding ayam cemani, hoping that your cemani will grow so well and have high quality, you need to have good quality of ayam cemani chicks first.

What do you find in the quote above? Let’s say you have ayam cemani chicks that you want to breed. Now, let’s imagine that they are your own children. In order to make your children grow well, what should you do to them? Caring for them, taking care of them, protecting them, loving them, and always helping them. Is it right? Yes. That’s absolutely right.

Before finding the answer, you might need to know more about ayam cemani.

Indonesia has a rare, all-black, named ayam cemani which is also called as ‘The Lamborghini of Poultry’. Yes, it is true. Ayam cemani is popular with its exotic black color and people usually consider it as a vessel of good fortune (myth in Indonesia). The name ‘ayam cemani’ is from ayam in Indonesia which means chicken, while cemani is Javanese for ‘all black’. The black color of cemani chicken is from a natural generic dermal hyperpigmentation that promotes the proliferation of black pigment cells.

This rare chicken is completely black – the eyes, beaks, tongues, claws, fur, even the internal organs are black at all. About the blood, cemani chicken actually has dark red color blood but some people say it is black, or at least very dark. The only part which is not black of this bird is the egg (we will discuss it later on the next part).

One reason why ayam cemani is very expensive is on the fantastic advantages of the chicken meat. To make it easy, you can read our article about the delicious taste of ayam cemani and its benefits. This chicken truly gives health benefits for human. The black meat is higher in iron and beneficial to women before and after giving birth. Even, many believe that ayam cemani also holds mystical powers that can help the owner. Some Asians believe that eating ayam cemani meat will ease their conscience. They sometimes sacrifice ayam cemani during childbirth in the belief that it will bring good luck for them.

Ayam cemani is a friendly birds that people can keep it at home as ornamental chicken or pet. The hens usually lay about 60 up to 80 eggs per year. The hens are not very good moms actually so that most eggs should be removed from their nests and then incubated in order to hatch. Start from this, the process of hatching will determine the production of the chicken. Just like the quotation above, if you grow your children well, they will be good.

Now, you might be wondering do ayam cemani chickens lay black eggs? NO! There is still misunderstanding among Indonesians who think that ayam cemani lays black eggs. Ayam cemani is truly a luxurious chicken with black color both inside and out. But it doesn’t mean that ayam cemani egg color is also black. The color is still same with other type of chicken which is cream-colored, light-brown, or ivory with pink spots. In other words, the color of cemani chickens are actually lay cream-colored with a slight pink hue. So is with ayam cemani egg yolk. The egg yolk is also same with other eggs from different type of chicken.Ayam cemani egg is the only part of this chicken which is not black.  The genetic changes occur when the embryo of cemani chicken appears. It signs that cemani chicken egg is healthy and can hatch.

Do any chickens lay black eggs?

As an observer and cultivator of chicken, so far we never meet any chickens that lay black eggs. Laying hens, broiler, or ornamental chickens, all of them lay eggs with normal color like light brown, cream-colored, or ivory. This is just public opinion that creates such thought. They think that all black chicken like ayam cemani must lay black eggs. If you ask is there any other type of chicken that lay black eggs, the answer is still one, NO. There is no other chickens lay black eggs. If you find ayam cemani egg yolk has black color or grey color, it is not because the color of the egg is black but because the black color of egg yolk occur when the embryo of cemani chicken appears.

Why is the Ayam Cemani chicken black?

Ayam cemani is a chicken which all the body is black. Feather, nails, skin, eyes, beak, ayam cemani meat until bones are black. A genetic change called fibromelanosis is what causes this physical condition. It helps the proliferation of black pigment cells. The gene which causes fibromelanosis is the mutation existed in Asia about over 800 years ago. A researcher from Uppsala University, Sweden said that Ayam Cemani has a genetic mutation which causes skin pigment changes. This mutation is the duplication of the pigment color in certain body parts. In this case, the black color is duplicated. The same fibromelanistic also occur to other chicken range such as Svart Hona chicken and the Swedish Black Hen.

How much is Ayam Cemani chicken?

Ayam cemani chicken price is relatively expensive due to its unique and exotic characteristics. This chicken is one of the most beautiful chickens in the world. The price of this chicken in Indonesia ranges from Rp500.000,00 to Rp700.000,00 for adult chicken. The price is quite affordable when we compare to the other import ornamental chicken which begins to entry into Indonesia nowadays. Moreover, the number of ayam cemani in the world is very rare, no more than 3500 according to a research. This type of poultry can only be cultivated in Indonesia and some European countries. So, no wonder if ayam cemani chicken price can be so expensive.

Now, we are going to answer the previous question…

How to obtain ayam cemani chicken with good-quality?

We know exactly that the poultry farming business nowadays has been increasing enough. There are many people who live in rural area or in suburbs run such kind of business as a primary or secondary business. Not only in Indonesia, other countries, even big countries also run this poultry farming business for example ayam cemani for sale usa. They breed chickens either to take their meat to consume or sell them to fulfill the need of fancy chicken collectors. There are many kind of chicken that people usually breed, one of them is black chicken. People believe that black chicken breeds can be a great opportunity for poultry farming. And this is only a reason why many people choose to breed ayam cemani.