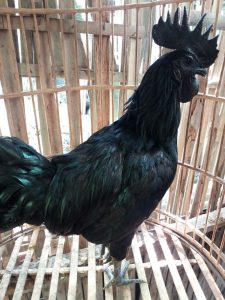 Gothic. What do you think of it? Gothic is possibly identical with mystic, dark, horror, and mysterious. But if it is about chicken, what are you thinking, then? There is one species that people know as ‘gothic chicken’ in the poultry world. It is ayam cemani chicken.

Cemani chicken is a rare breed from Indonesia. Everything about this chicken is black – feathers, beak, legs, toe nails, meat, bones, and organs! There are actually several parts of this chicken which is not black. First, its blood which is actually comes in a very dark shade. Second, its tongue which is dark grey (sometimes we can also find cemani chicken with white-pink color). And the last is cemani eggs which is cream-coloured but sometimes also brown.

This mesmerizing bird is one of the rarest species of chicken in the world. Besides, its all-black appearance has made it one of the most exotic and also mysterious breeds in the world. On the Indonesian island, exactly in Java, this black chicken is even believed can hold mystical powers in its black meat and according to a source, it has been used in rituals as far back as the 12th century.

Due to its dark appearance, Javanese also see it as an emissary between the human and the supernatural world. Besides, they also believe that cemani chicken will bring poewr, reputation, and also wealth to its owner. However, one thing that should be emphasized here is that every little thing happens because of the power of The Almighty One. It is not because of the power of this gothic chicken.

Why is the Ayam Cemani black?

Just imagine how it is like to eat black meat. You will feel so challenged and little weird. Well, cemani chicken is not the only black fowl, but most of the other have pink tongues and deep brown eyes, along with internal organs of the normal colors.

So what makes cemani chicken black? This phenomenal black color happens as the result of the excess pigmentation of the tissues. Caused by a genetic mutation, this effect is known as fibromelanosis. Don’t worry about it. It may sound alarming but it simply means that this chicken produces about 10 times more melanin than the average chicken. This process starts since the chicken is in the embryo, then resulting in the most adorable little chicks.

Where to buy goth chickens?

Well, it is actually not easy to get your hands on this cemani chicken. This breed was developed in Indonesia. But according to International Trade Administration, The U.S. Department of Agriculture bans live chickens imports from Indonesia due to concerns over avian flu. Therefore, these extraordinary chickens are very hard to get in America. As a result, this goth chicken price is extremely expensive. Nevertheless, you can still find breeders outside Indonesia such as in Netherlands, Germany, Slovakia, and the Czech Republic where this chickens are kept.

So, how much do ayam cemani chickens cost? One of the best-known and reputable breeder in Florida offers more than a thousands dollars per pair of juveniles. As in livestock that can cost you anywhere start from $50 a bird to thousands of dollar for a pair. But if you are searching price of ayam cemani chicken for sale, take a deep breath first because it will run you $2,500 a pop! It means that this black gothic Indonesian Cemani chickens will cost you $5,000 a pair. Really a WOW price!

So, are you interested to keep cemani chicken as your pets? Or you want to try this  black chicken meat?

If you want to know more how to get ayam cemani, you can contact us by leave a reply in the box below.

Hopefully you enjoy our article. For more information you can leave a reply below.