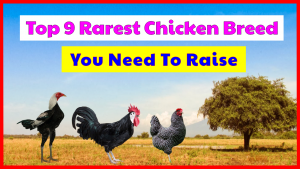 Cultivating chicken in either backyard or poultry farm is always good to do. This can be always inspiring for chicken breeders, especially those who live in the urban areas where wide area or field to raise them is difficult to find. No matter what their purpose, raising chicken is quite interesting. They possibly have the ornamental purpose or keeping them as a pet. In another side, they also perhaps have an economic purpose for getting eggs and meat to consume or sell.

We know that because people love their chickens and are attached to them so much, they always prefer to select and raise chicken breed which has can attract them. Raising the rarest chicken breed for example. Besides, they will choose those that have good characteristics. In this article, we are going to discuss critically endangered chicken breeds. In the end, hopefully, you have an insight about the rarest type of chicken breeds which you need to raise to keep them still exist in this world. There will be some special, favorite, and rare chicken breeds.

The rarest chicken breed is always an obligation, a must-have for the breeders. They are so exotic and only few in number. If you want to know more about rare chicken, you need to see rare chicken breed list. Occasionally, raising rare chicken can mean a big payday for you when you can manage to breed them successfully. This is our responsibility to keep these rare chicken alive. The better we try, the better the result will be. Now let’s see top 7 rare chicken breeds with pictures you should know below:

Poultry farm breeders have tried to keep this kind of chicken in Belgium for a long time. The Campine chicken is native to a less fertile district of Kempen. In 1914, American Poultry Association recognized this chicken in two varieties which are Silver and Golden.

The Campine Chicken is categorized as the rarest chicken breed, the critically endangered chicken. They exist as a bantam in Europe but is not standardized in the UK in this size. The Gold Campines are the one that is very rare. The temperament of this chicken is very active and the characteristics are vigorous forager.

The bantam size of the Campine Chicken did not appear in the UK until the 1950’s. It has been often seen since then. Then, in 1969 this chicken was merged into the Rare Poultry Society at its formation.

Broken heart. It is the breed’s name translates of this chicken that has romantic sense. They have small, fine bones, and the proportion of meat that can be quite high. They are also a fancy chicken breeds actually. The Crèvecoeur Chicken is one of the oldest of the standard-bred fowl of France. The population of this type of chicken is critically low level. This is why people consider them as one of the rarest chicken breeds in the world.

According to The Livestock Conservancy, there are only five or even fewer breeding flocks in Americas, less than 500 Crèvecoeur Chicken in the US, and less than 1,000 birds worldwide. The breed was originated in Crèvecoeur-en-auge, Normandy, France centuries ago. Crèvecoeur Chicken is the heritage breed that we should keep.

People develop the breed of Crèvecoeur Chicken for the quality of their meat. It is fine, short, and very white in the breast. The leg meat can be so dark and almost duck-like in color. The American Poultry Association recognized and admitted this chicken in 1874.

This chicken is a heavy dual purpose breed. Very contrary to its name, this rare chicken is originally from the United States. So, why is it named so? You probably wonder why an American breed of chicken calls it ‘Holland’.

Back in the past, the breeders began with light-weight stock originally imported from Holland. Then they mated it with White Leghorn, Lamona, Rhode Island Red, and New Hampshire. This is where Holland chicken created – White Holland.

Another cross of other types of chicken such as Barred Plymouth Rocks, Australorps, White Leghorns, and Brown Leghorns has created the barred variety of Holland chicken.

Holland chicken comes with medium sized. They are heavy chicken with a meaty carcass. They have a moderately large size and bright red single comb with six well-defined points there. Just like we mention previously, there are two varieties of this breed, Barred and White.

The breed of this chicken was developed as perfect dual purpose poultry breed during a time of rare and popular white eggs in the USA. Nowadays, Holland chicken is one of the rarest chicken breeds in the world. Their availability can be so limited. American Poultry Association’s Standard of Perfection recognized and admitted them in 1949. Now, the breed is categorized and listed in the Critical category of the American Livestock Breeds Conservancy’s Conservation Priority List.

In French, the words ‘la fleche’ means ‘the arrow’. This chicken probably gets their name from the arrow-like shape of tis V-shape comb. However, the real fact is that its geographic origin is one reason why they got their name. There is a town in the department of Sarthe within the Pays de la Loire region of France called La Flèche.

La Fleche chicken is playfully called the ‘devil breed’ due to its shiny black plumage and its unique V-shaped comb that you can see in the picture. It looks like they have red horns. People mostly know this chicken as good foragers and do well in free range situations. They can also adapt easily to confinement or cage.

These chickens have been relatively popular in France and Germany through the 20th century. But they only existed in the UK until the Second World War. Nowadays, La Fleche chicken is getting more attention. According to a source, they stand at the head for table qualities. They have thin white skin with tender, delicate, juicy, and also short-grained flesh. They also have meaty and full in shape breasts.

La Fleche Chicken is one of the rarest chicken breeds that actually has never been particularly popular in the United Kingdom. American Poultry Association recognized this type of chicken as a standard breed in 1874.

This chicken was first recognized by the American Poultry Association in 1883 as a standard breed in the Black Breast Red variety. This organization did not recognize the other varieties such as White, Black, Spangled, and Red Pyle Malays until 1981.

Malay chicken is an ancient breed with Asian background from the East. They are very tall in height around 3 feet tall. Due to their long legs and upright posture, people usually use them for races. They obtain their great height from a combination of a long neck, long legs, and upright carriage of their body.

The behavior of Malay chicken is also unique. They are quarrelsome enough and the situation can get worse when the owner keeps them in the cage or confinement. The rooster can be aggressive in nature. They are also intolerant of other roosters.

This chicken is popular with long legs and neck that makes them tall and slender appearance. This chicken was originally from Great Britain and developed mainly for exhibition purpose or ornamental purpose. People developed them from breeding Malay Chicken and Old English Game during the 1850s.

Modern Game chicken cannot stand in the cold weather well due to their short feathers. They need plenty of exercises to keep the muscle tone. They appear in many colors. The most common are Black Red, Brinchens, Black Brown, Piles, and Duckwings. According to a source, there are 18 color varieties now in America and 13 colors in UK. They appearance make them as a unique chicken breeds.

The modern Game chicken was admitted to the American Poultry Association’s Standard of Perfection in 1874 as they claim this chicken as the rarest chicken breed.

The Black Spanish chicken is the aristocrat of the poultry world. You will not find the other breed of chicken that so embodies the word ‘aristocrat’ in their postures like Spanish chicken. They are lustrous greenish black in color, tight fitting of the feather. Besides, they also have moderately flowing tails.

The other unique thing about this chicken is on its white earlobes on their face. People widely know and recognize Spanish Chicken for their ability to lay large number – very large number of very large white eggs.

As one of the rarest chicken in the world, the American Poultry Association standard already admitted them as a recognized under the name of White Faced Black Spanish in 1874.

This chicken has a unique appearance, with a red comb, red earlobes but in its center is white, also red wattles. The comb on Penedesenca males will stand upright while in females will droop sideways. Also, they have black eyes on the edges and have irises that are colored like honey.

The next type of rare chicken is the Pyncheon breed. This Pyncheon is a type of bantam originating from the Northeastern United States. This chicken is unique with its body size that is not too big. Pyncheon males have an average weight of 0.8 kg while females have an average weight of 0.7 kg. One characteristic of the Pyncheon breed is that it has a single red comb and a tassel behind it. Because there is a tassel behind the comb, sometimes the comb does not grow straight back but can turn and form the letter ‘S’.

The color of the feather when they was a baby was yellow, and when they grew up they had the color of feather with a Mille Fleur pattern like the type of Phncheon in general. But other feather colors are developed namely porcelain. Pyncheon breeds are usually kept as ornamental chickens. The female will lay eggs with a white eggshell color and small egg size. Female Pyncheon is good mothers who want to incubate their eggs. The character of this breed is docile, easy to breed, calm, and can tolerate a variety of climates. And this Pyncheon breed has been recognized by the American Bantam Association.

One important thing that you should know that keeping and raising a backyard flock of the rarest chicken breed means a lot to you. You can be a vital part of protecting the heritage and rare chicken breeds. There are actually so many ways we can do to save the world with chickens. If we can do this successfully, it will be totally awesome!

Just imagine when you raise chickens, the rarest chicken breed especially. Even if you cannot have a rooster to keep perpetuating the breed, you still have taken an important part here. You can provide fancy chicken for sale, like campine chicken for sale for example. By doing this, you are still helping out by fulfilling a demand for these breeds from many breeders over the world who are raising and keeping them. In other words, you add the chicken population which means a lot to the world!

Keeping rare chickens can cause lots of fun. They can also be useful for us. They are very good layers, hardy birds, good mothers, and good meat producers. If keeping those rare chicken is the easiest thing we can do to save the world, why don’t we do that? Why are we still hesitant to do that, if keeping the heritage of rare chicken breeds is one of that way?

10 pemikiran pada “Top 9 The Rarest Chicken Breeds, How Rare Are They?”