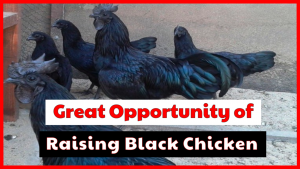 Are you a chicken breeders? Do you run a poultry farming business? What kind of chicken do you cultivate? Have you ever breed black chickens? For some people who realize that breeding black chicken is quite beneficial might have been running such business. But those who don’t know yet how beneficial it is will probably ask ‘why black chicken breeds can be said as a great opportunity for poultry breeds?’ Yeah, it’s totally true. Black chickens are a type of chicken which is popular among other types. Some of them, even are very rare and have expensive price.

The first list of black chicken breeds, is an Indian breed of chicken local to the Madhya Pradesh area in India. As you can see in the picture above that the color of it is completely black. If you see more detail, there is black plumage with a greenish iridencence on it. Its legs, toenails, beak, tongue, comb, wattles are also black. Even, this chicken also has black meat, bones and dark organs. The kadaknath black chicken meat is also useful for medicinal properties. This is why this chicken is in high demand.

Kadaknath chicken is very famous for the quality of its meat, texture, and taste. The medical value of this chicken is in homeopathy. It is also useful in treating particular nervous disorder. The meat contains so many kinds of amino acids and vitamin. Once you consume this chicken meat, your blood cells and haemoglobin will increase. There are still a lot of benefits you will obtain from Kadaknath chicken.

Similar with its name, Sumatra Chicken Black is from Sumatra, Indonesia but it is also native to Java and Borneo, in which they live in the wild as well as on poultry farms. This chicken come in several colors, but black with red is the most favored one. Sumatra Chicken Black has long and flowing tail feathers. This chicken used to be sold for fighting, but now are mostly sold for exhibition.

From the picture you can see how beautiful and luxurious this chicken with long flowing curves, abundant feathering, and also a rich green sheen on it. In the wild, you can found few color varieties of this chicken. However, the most favored characteristics of Sumatra Chicken Black is those with long, flowing, low tail, beetle green sheen, black shanks with yellow soles, gypsy-colored face, and its multiple spurs – they often have three spurs on each leg.

If you are looking for an old breed of chickens originated in the Shumen region of Bulgaria, Black Shumen Chicken is the one you can find. The characteristics of this chicken is similar with a Mediterranean chicken type which has big combs and wattles, also early-maturing. This chicken has white skin, black feathers with a green sheen. Black Shumen Chicken actually comes only in the black color-variety, and it has a single comb, and also slate-blue legs.

This chicken is actually black green in color and has wide single comb with double wattles and also white earlobes. The other black color is in its feet and the beak while the skin of the chicken is white. The hens of this type have drooping combs. They are also good layers of white eggs. The production of the egg is ranging about 150-165 eggs. Although their feather is black, but they didn’t laying black chicken eggs. The color of their egg is white. Black Shumen Chicken is suitable for backyard chicken. It is also good foragers so that it can control grass or bugs in your backyard.

H’mong Chicken is a rare breed belonging to the H’mong ethnic minority people who live in the north-western mountainous provinces of Son La, Lai Chau, Lao Cai and Bac Can. Just like any other chicken, this chicken will fight among themselves to build dominance. It is like Sumatra chicken, they can kill each other and only stop fighting when a flock leader is built.

H’mong Chicken has black meat and bones. When this chicken hatch, their feathers are totally-black until they reach the age about 5 months, then the color will start developing, except for the females. 75% of the females only come in solid color such as solid black or solid blue. This chicken also has valuable medicine as well as an energizing food. This is why it is often consumed as a favorite dish, and often seen on the menus of restaurants in Ha Noi.

This chicken is very well-known for its exotic black, we mean ‘full-black color’. However, cemani chicken eggs are not black. The eggs color is still same with the general one. This chicken is from Temanggung, Central Java. Ayam Cemani price is also one of the most expensive chickens in the world. Its beauty and exoticism has made this chicken known as the Lamborghini of the poultry. If ayam cemani for sale, it also have a high price. The feather, beak, eyes, tongue, legs, toenails, bones, and its internal organs are black. When it is skinned, you can even see this black chicken meat.

Everything about this chicken is black, except for its tongue, blood, and egg. The tongue is usually grey but if you find black tongue, don’t worry. It also normally happens. Then, the blood is dark red, while the ayam cemani eggs is like the other commonly egg, cream-colored or light brown. The exotic and elegant color of this chicken can be the reason why ayam cemani chicken price is quite expensive that it is known as one of the most expensive chicken in the world. The price of ayam cemani meat also high because it contains a lot of benefit and good for you health if you consume it.

Are there any black chickens?

Yes, of course. There are so many types of black chicken breeds in the world. What we mentioned above are just some of them which is most popular and favored by most people. There are other any black chickens in the world which also has different characteristics such as Ancona chicken, Valdarno chicken, Orpington chicken, Silkie chicken, Minorca chicken, Swedish Black Chicken, White-crested black Poland, and many others. It is important to know that even though the those chicken are called ‘black chickens’ doesn’t mean the meat is also black. Some of them have inside and outside black color, but some only have outside black color.

How is black chicken black?

The phenomenon of internal blackness, called fibromelanosis is the reason why black chicken has black color or dark color throughout the inside of the chicken. According to some researchers, this phenomenon is caused by mutation which affects how pigment-producing cells travel in the very early stages of development. Furthermore, a few wild chickens or birds are naturally melanistic which means that because of the genetic variations, they have more pigment production in their skins of feathers. It will be darker than the common one, often brown or sooty grey.

That’s only little bit about black chicken breeds, whether black chicken for sale or not (because its rare existance). So, are you wondering to raise it? From the appearance, it may seem weird or terrible but don’t judge the book from the cover. Just try it, and you will love it 🙂