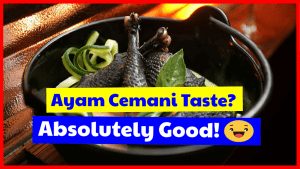 What Do Ayam Cemani Taste Like? The Prized Black Chicken of Indonesia

The Ayam cemani chicken is the local chicken from Indonesia and has been exist since the Majapahit era. The word of “Cemani” in Sanskrit mean “black” and “Ayam” in Indonesian mean “chicken”. There is stories tells Ayam cemani originate from Kedu, Temanggung, Central Java. Because this chicken lot found in Kedu so this chicken called Kedu’s chicken and in west java called Hideug’s chicken. But it is still need more research to know the exact.

How Does Ayam Cemani Chicken Taste as Black Chicken?

Cemani chicken meat  is good for health and human body.  Cemani chicken has many health benefits such as boost the immune system. The meat of cemani chicken contains many minerals so it can fight various seeds of disease in the body. Thus, you will be protected from various diseases, especially diseases caused by viruses and bacteria. Also this black chicken is essential for child growth, because it contains phosphorus that makes the children bones more strongest and it help grows normally. Not only for children, but for productive age is also good for bone health. Cemani chicken meat also good for preventing arthritis. Because the content of selenium and minerals in chicken flesh can prevent and reduce the symptoms of arthritis. So, wanna try this unique chicken meat?

Where to Find Cemani Chicken Meat?

Why Is Cemani Chicken Expensive And How Much The Price?

There are two species of ayam cemani, Ayam cemani chicken and Ayam cemani walik. Both of them are similar, they has black from feather, meat, bone and internal organs are black. But Ayam cemani walik has different feather. It has an upside-down feather and the feather looks upward like a reverse. So, this kind of chicken are popular around the ornamental chicken collector.

Are All The Cemani Chicken Parts Colored Black?

Another interesting facts about cemani chicken is their body part are not totally black. Even though their feather, meat, bones, combs, legs, and beak is black, but their tongue are white or grey. Then, the color of ayam cemani chicken blood is dark red.

How About Ayam Cemani Chicken Egg?

Beside, Ayam Cemani chicken eggs is one of the most popular and many people are looking for this eggs. The benefit  of eggs is almost the same as the chicken meat. The demand for the meat and eggs  is always increase. But due to the limited of the supply makes it rare. If you are interest for breeding ayam cemani it is a good opportunity. Lets’s start breeding ayam cemani chicken and get the enormous profits.

If you have some question, Kindly contact us anytime and we will serve you with pleasure. For further information you can check on our social media on facebook or instagram.