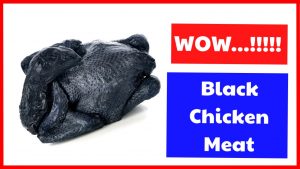 The Delicious Meat Which Is Very Difficult To Find

Have you ever seen the black chicken meat? It is a type of meat that is difficult to obtain.

This black meat is hard to find in the grocery store because of the rare population.

Black chicken price is more expensive than the other chicken. The expensive prices of these kind of chicken also makes it hard to find.

It might be sold on the Asian grocery or at a chicken farm but nothing is certain.

There are some breeders who breed poultry that has black meat. Also, they provide black chicken for sale.

The shape is almost similar to chicken meat in general, but this is black, even to the bone.

Many kinds of chicken have black chicken meat out there such as ayam cemani chicken, kadaknath chicken, and silkie chicken.

They have the same all-black pigmentation so their meat color is black.

Kinds of Rare Chickens In The World Who Has Black Meat

There are many kind of chicken in the world who has black meat.

The black chicken or cemani chicken is the common one, it is include the type of ornamental chicken.

And there are also Silkie chicken who has black meat.

Those are usually use for collection because of the unique appearance. There are some black chicken are classified into the rare poultry in the world.

But most of them has the high prices especially for an adult chicken. Then what kind of chicken that has black meat? Find the answer down below!

The most popular for the black meat is ayam cemani or cemani chicken.

People more familiar with ayam cemani chicken because of the the magnificent look. Ayam cemani is a native from Indonesia.

As you know that Ayam cemani has black color which is not limit on its feathers. It has solid black feathers, skin, beaks, claws, and meat.

The black color is on the whole body and even on the organ inside.

The eggs has the creamy color with pink fleck on the eggs shell.

So, even the it has black color but it does not lay the black eggs.

Likewise the ayam cemani chicken eggs yolk that same like chicken in general.

The black color will appear when the embryo arise. So, this chicken is so stunning with the black feather color.

2. Silkie Chicken, They Has Fluffy Feather But The Meat Color Is Black

It is not black, but they has various colors on their feather, such as white, brown, grey, and black. But why silkie’s chicken meat is black?.

The black color of silkie’s meat is from the fibromelanosis which causes skin pigmentation phenotypes in the chicken.

The name of silkie chicken is because it is a typically fluffy plumage.

Because the feather is soft like satin or silk. It is one of the cute and funny chicken.

As we said before, even it has black meat and black bone, but it the feather not only black.

Uniquely, this funny chicken has 5 toes and it is different from the chickens in general who have 4 fingers.

This chicken are special because of distinctive physical characteristics. Also it is quite popular for their calm and friendly temperament.

Where Do Silkie Chicken Come From?

Silkie chicken is a native from China. In China, silki

Also it use as prevention of gray hair and it is one of the expensive chicken in china.

It known used as medicine since long time ago until now. They usually cook the black chicken meat as soup and  other Chinese recipes.

Nowadays many breeder in Europe breeding This unique chicken. The smooth feathers and the friendly behavior makes this chicken hunted by the collector.

The most interesting is this unique chicken has several variety. The variety of  Silkie chicken  such as buff, blue, black, splash, partrige, gray, and of course white.

The Kadaknath is mostly found in eastern Madhya Pradesh especially around Jhabua and Dhar. At a glance this black chicken are similarly Ayam cemani.

The differences appear in body fat and comb. Most Ayam cemani are having pointed comb and body looks lean than Kadaknath.

The demand of the this chicken in India are high because of the medical value.

Kadaknath chicken meat and the eggs are sold for high price in the market.

The benefit of  this chicken is contains amino acids and vitamin. This meat helps to increasing the blood cell and hemoglobin.

Beside, The kadaknath chicken eggs are used to treat headache this meat also good for women health.

Also it is good for an old people and high blood pressure victims, since the cholesterol content is lower Rich in amino acids and higher than that of other kinds of birds.

Even it has black meat this chicken does not lay black eggs. The eggs has light brown color like laying hens and weight around  30 to 40 g.

Then for the meat kadaknath is High nutrition , it has higher protein content than other general chicken. The black meat is contain lots of vitamin which is good for human body.

This chicken meat are lot consume by the local people because believed to infuse vigor.

This chicken also are easily for breeding because its adaptability to the local environment and  disease resistance.

The varieties of Kadaknath are jet-black, pencilled and golden. It is the only one black meat chicken from India, so it so precious for India’s.

Have you heard about Swedish black chicken or Svarthöna? It is an Swedish breed domestic chicken originally from from Mozambique.

At glance this chiken are similar with ayam cemani chiken.

Even it is extremely hard to find in Europe to this day. So the price are expensive to purchase.

The price are going as high as $5000.00 per pair in the beginning. Also The Swedish Black Hen are one of the most intelligent breeds of poultry.

Another name of this Swedish balck is “Bohuslän – Dals Svarthöna” because it is from those two counties in Sweden.

The Swedish Black Hens are relatively small and sleek the hen weigh 1.5 kg.

Then for the roster can weigh up to 2 kg. The eggs are small (38-48 g) with a large yolk. The Swedish Black Hen is an utterly captivating bird with bewitching good looks.

This is also good form consume by human. And the black meat can be create into several menus.

Such as you can grill, fry or make some soup depend on you.

Chinese people usually use it as medicine since the seventh or eight century. The black chicken meat are trusted for boost of energy after giving birth for woman.

It also good for blood pressure, lungs and stomach. There are many benefit you can obtain from the black chicken meat.

How About The Color of Black Chicken Eggs?

The black color on black chicken eggs will appear when it becomes an embryo. Thus, it means black chicken doesn’t produce the black eggs. Most of them  has an ivory or cream color.

Black chicken eggs price also higher than the other eggs. And it’s quite difficult to find black chicken eggs for sale because the existence is rare. Breeders usually only breed it to maintain its sustainability.

For more information, you can check on our social media Facebook and Instagram. We will help and give you the clear information about the black chicken meat and other interesting topic with pleasure.