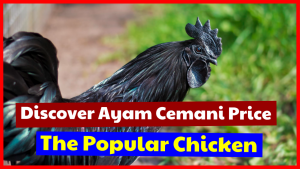 Ayam Cemani Price : Discover The Fantastic Price Of The Indonesian Ornamental Chicken Which Has Been So Popular In The World

Ayam Cemani Price – Don’t claim yourself as an ornamental chicken lover if you don’t know about ayam cemani chicken. Even though this chicken is originally from Indonesian, but don’t underestimate its popularity in other countries. Ayam cemani is a very exotic and rare chicken which is native to Indonesia, exactly in Kedu, Temanggung, Central Java, Indonesia. The beauty of this chicken no doubt is very popular among chicken lovers in the world. So, no wonder if ayam cemani price can reach high, really high price.

Cemani chicken has really beautiful appearance that makes people fall in love with it for the first time they see. The beauty of cemani chicken starts from its physical appearance which is totally black in all of part of the body. From the beak, plumage, eyes, skin, nail, bones, meat, even the internal organs are black. Only by knowing this fact, you must be interested with this chicken, right?

Well, the solid black color in cemani chicken’s body (inside and outside) is caused by a genetic mutation called fibromelanosis. This mutation not only makes the outside part of cemani chicken black, but also the inside part ot this chicken. This is truly an unusual phenomena that makes this gothic chicken claimed as the rarest chicken breed.

However, popular with its exotic black color, there is a fact that you should know. There is some parts of ayam cemani chicken which doesn’t have really black color. First, its blood. The blood color is similar with general chicken, but cemani’s usually is darker. Second, its tongue. If we pay more attention to the cemani chicken’s tongue, we can see that it is not really black. It is usually dark grey, even some chicken also has white tongue like other general chickens.  The last, ayam cemani eggs. Many people think that ayam cemani lay black eggs. However, this is a totally wrong opinion. Cemani chicken hens lay eggs with cream colored, sometimes brown. It is similar with other general chickens. So, the fact is ayam cemani don’t lay black color chicken eggs.

How Much Do Ayam Cemani Cost?

Do you know how much ayam cemani price? Just guess how much is it before we discover more in this site.

How Much Is The Most Expensive Chicken?

As we mention previously that the price of ayam cemani chicken can be different in other area. The price of this chicken in Indonesia will absolutely be different in other countries. Ayam cemani for sale Florida for example.  In other countries, ayam cemani chicken is very difficult to get because of its scarcity. This is also one thing that influence the high price of this chicken.

According to “Phoenix New Times”, Black Indonesian Ayam Cemani  Chickens will cost you $5,000 a pair. Absolutely fantastic price, isn’t it? It is also said that the king of the expensive fowl would have to be this Indonesian chicken breed that will run you $2,500 a pop!

There is one breeder based on Florida named Paul Bradshaw who was the first breeder to have these chickens in the US. He started selling this fowl for $2,500 each in 2013.

See.. Ayam cemani price is so fantastic that no wonder if ayam cemani chicken is claimed as one of the most expensive chicken in the world!