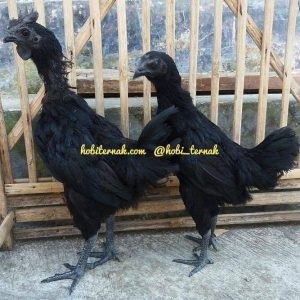 Recognizing The History Of Cemani Chicken

Cemani chicken is a kind of fancy chicken which originally comes from Indonesia with the all black colour in its body. More specifically, this chicken is exactly from area in Kedu district, Kedu sub-district, Temanggung regency, central Java and it has already existed since Majapahit kingdom era. The first owner of it was a powerful ascetic man named Ki Ageng Mangkuhan. At that time, however, Cemani chicken had a white beak used to treat the illness of the functionary’s child in the Ki Ageng Mangkuhan district, and finally the illness could be successfully treated.

Having treated the child successfully, Cemani Chicken was paired to other chicken with the same black colour. This mating brought out a chicken child with the light black colour, including its beak. Therefore, this chicken is named Cemani chicken taken from sanskrit which means the light black chicken.

The total of Cemani chicken nowadays is getting decrease which gives effect on its expensive price. It is caused by its limited breeding and only exists in Indonesia and Europe area.

Cemani Chicken has black colour total in its body. Then, why it has egg with white colour?

Some people might be wondering why Cemani chicken could have black colour.  However, it is described in a research that its black colour happens because of the unique genetic condition called fibromelanosis.

The most astonishing thing from Cemani chicken is the egg which has white colour.  It has the same colour and form with the common egg, which is white like bone or cream-coloured with pink spots. It also happens when we seek out from the inside of egg that is still same with other common egg. The black colour will appear just after the fetus of Cemani chicken has appeared.

According to the research, the white colour in egg is caused by the fibromelanosis process which happens in chicken’s cell and it does not infect to the eggshell. The reason is that the eggshell contains the calcium crystal carbonic which is basically same with all chicken type.