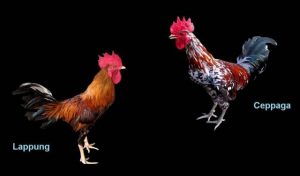 What is on your mind when you hear a laugh sound of the chicken? Seriously. This chicken is truly laughing like a human. Are you surprised? Or maybe you have ever heard about it? Indonesian people possibly already know about this type of chicken. Let’s call it laughing chickens. It is because it is originally from this country, exactly from Regency of Sindrap, South Sulawesi.

Besides, laughing chickens type is a kind of chicken which is so popular for its ability of crowing. That’s why Indonesia is a country that mostly conducts a laughing chicken competition. Ketawa in Indonesia means laughing so that people normally call laughing chickens ‘ayam ketawa’. The sound of Ayam ketawa crowing is so melodious. You will be able to hear their voice in the morning before dawn.

The sounds of this chicken will hypnotize you. It has an amazing sound will entertain and lulled. Then in the morning will feel so much fresher and has the more beautiful atmosphere. Just compare the condition before and after you have Ayam ketawa as your house pet. You will then truly realize the differences.

Laughing chickens can be classified as ornamental chicken or fancy chicken. Because this unique chicken has different excellence than other chickens. Besides, Ayam ketawa has a unique sound of cockcrow if we compare to other types of chicken rooster sounds. This unique chicken has a crowing sound which is similar to the human laugh.

Are you looking for Ayam ketawa for sale?,  Then you can find this unique chicken easily in Indonesia. There are so many ornamental chicken lovers who fall in love with this chicken because of its sound. Even though this chicken does not have the uniqueness of its body characteristics, but many people admire them and hunt them to be an ornamental house pet. Again, this is because of their excellent sound!

What should you know about laughing chickens?

Talking about laughing chickens, there is one information you should know. We can hear a beautiful sound of crow only from the rooster. The hens cannot produce such unique sounds. Due to this reason, those who want to take a part in a contest of ayam ketawa will prefer laughing rooster.

Nevertheless, it doesn’t mean they are not interested in the laughing hens. There are also a lot of people who want to have laughing chickens by themselves. In other words, they want a couple of laughing chickens so that the hens can lay eggs. In this case, both laughing rooster and laughing hen that plays a role of ayam ketawa hatching eggs are needed.

Pairing different species will cause laughing rooster not able to produce melodious and amazing crowing. Therefore, every chicken ornamental lovers or collectors always pay attention to such thing. They want to maintain the preservation of laughing chickens and its sound excellence.

At a glance, this ornamental chicken looks like the common type of chicken like free-range chicken or others. The color of the feathers, its body posture, even the food are mostly similar. What makes people fall in love is the very melodious voice or their crowing.

Indonesian people are always enthusiastic to preserve or breed this chicken so that they can still exist in the world. In addition, the contest of laughing chickens nowadays has already conducted in many areas in Indonesia. This can explain why laughing chickens for sale lately is increasing.

The excellence of laughing chickens

Don’t claim yourself as an Ayam ketawa lover if you do not know the excellence of this laughing chickens. Once someone decides to keep it as the house pet, they probably know the reason why. So, let us ask you a question: Why do you choose to have ayam ketawa?

The possible answer to the question above is because you will fall in love with their cockcrow, don’t you? Yes, This is the most reasonable answer. The excellence of laughing chickens is one the sound they produce. Due to their sounds, as we mention in the previous section this chicken often join the contest of ayam ketawa.

The laughing chicken who will join the competition. Must be considered to keep them has a good look at the appearance. Before you decide which one will you take, you may need to consult with some expert on Ayam ketawa breeders.  Because if we directly look at the information from the laughing chicken breed, it can be trustworthy. We can see the type of laughing chickens directly. We can hear their sounds directly. And we can seek out the information about them in detail from the breeders directly. Well, this is only a suggestion for you, especially for newbies.

This is a type of chicken that can produce quick interval tone. The laughing rooster usually produces quick and long of laughing sound when they are crowing. Some people also call them ‘gretek’.

This type of chicken can produce slow interval tone. Their cockcrow is discontinuous. Sometimes, the crow sounds like is going to stop, but it is actually not – the cockcrow is till continued slowly.

When you hear their cockcrow, you will feel like you just have broken heart. This is because Dodo sounds like heartbreaking. In other words, you can be melted when you listen to their crow. Because of its uniqueness, people usually call it as ‘dangdut’.

Based on the several laughing chicken breeders expert, Ayam ketawa of Dodo is the most expensive one among others types of this chicken. Because of its sounds that heartbreaking. That’s why some people said this is a good business opportunity. Then, they begin breeding them. Commonly, the price of Ayam ketawa chicks between 300-500 thousand rupiah, while the adult one can reach the price range of 1.5 million to 15 million. Even, for the laughing rooster chicken that has really good quality and originated from the original breeding, Sulawesi, the price can reach 60 million rupiah! That’s a great number, isn’t it?

The contest of Laughing Chickens in Indonesia

Usually, There is no cage in the contest. Because this contest aims to show the beautiful performance of this laughing chicken in front of the judges and the audiences. There is only bamboo or wooden sticks for the chicken to perch and show their ability to cockcrow. Then for your information, the price of Indonesian laughing rooster that wins the contest can reach 40 or 50 million rupiahs or more. That’s so fantastic price for a fancy chicken!

The origin of this chicken is from our country, Indonesia, Ayam ketawa or laughing chickens absolutely should be preserved and cultivated. In our country, to get superior types of the broodstock, there is no ban for chicken lovers to do cross-breeding. Nevertheless, it is better for us not to do this. We had better keep the original race of laughing chicken by pairing the same type.

Pairing laughing chicken type with another type will create other variety of chicken. It will affect the quality of its offspring. This you had better avoid cross-breeding so that from its pure mating, you can get an original Ayam ketawa that can produce a melodious sound.