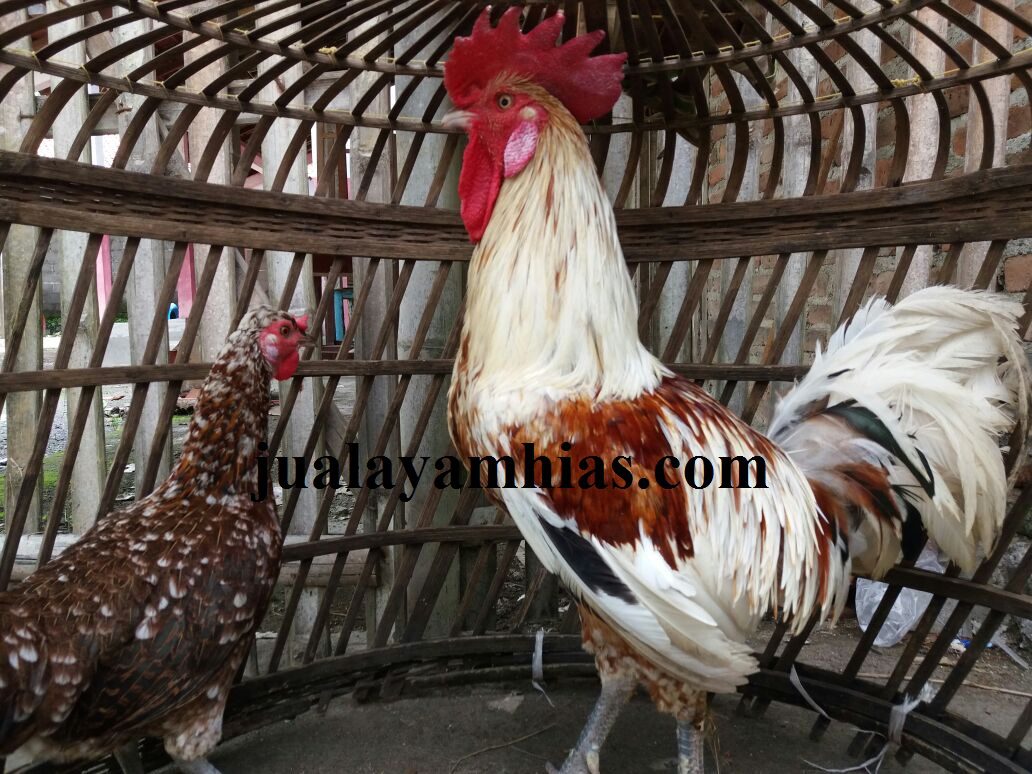 Show Your Laughing Rooster Performance Up In Front Of Hundreds, Even Thousands Couple Of Eyes

The history of Laughing Chicken

The original habitat of ayam ketawa is in Sidrap Regency of South Sulawesi about 183 km to the north from Makassar. In this original habitat, people usually raise this laughing chicken in the area of Baranti, Panca Rijang, and Simpo Arasi’e. They only keep it in the family environment as house pet.

From the appearance, ayam ketawa looks like a common chicken. The color of the feather and the body posture are quite similar to free-range chicken. The difference is in the voice of its crow. When you hear the voice of this Laughing rooster crow, you will realize how unique and attractive it is that sounds like a human laugh. Somehow there are some people consider its crow sounds like kuntilanak (Indonesian lady ghost) or mak lampir (a legend of witch shaman from West Sumatra). Those two characters have horrible but shrill voice.

At the beginning, this laughing chicken is so popular in the Sidrap Regency only. People only keep and cultivate this chicken in the Bugis Palace (Keraton Bugis), especially Bugis nobility that shows a symbol of social status. But nowadays, it is now selling well in the market of ornamental chicken lovers. The price of this Indonesian laughing rooster, especially funny rooster crowing can be expensive. Ayam ketawa with the special crow, for example, such as the voice of mak lampir can reach up to millions rupiah. For an adult, laughing chicken with ordinary quality can reach 500 thousand up to 1,5 million rupiahs. That’s a fantastic number, isn’t it?

Based on the types of laughing rooster crow, there are 3 classification of the voice types. First is a type of ayam ketawa that has quick interval tone. People usually call it laughing chicken type of Garetek (Ayam Ketawa Garetek).

What can differentiate the type of ayam ketawa is not only by the voice but also the feather. Even, some Buginese people believe that the color of laughing chicken has certain meaning so that some of Ayam Ketawa lovers belief in certain power of this chicken. From the color of the feather, ayam ketawa can be decided into several types. There will be some explanation of Buginese people’s belief toward each type of laughing chicken.

So lately, a lot of people has begin trying to breed this Indonesian rooster chicken that has rare laughing voice. Every color has a positive meaning.

Since ayam ketawa is originally from Indonesia, its admirers are mostly from Indonesia too. Some of them keep this chicken for house pet purpose only. The others keep ayam ketawa for winning the contest purpose. No matter what purpose of having it, Indonesian laughing rooster is never ending with the magnetism of its unique crow. This becomes the main reason why people choose laughing rooster breed for their farming poultry business. Due to the request of ayam ketawa which increases, they see this as a good prospect to run their business.

Before we explain this part, let us remind you that the only laughing chicken that can produce melodious voice is the rooster while the hens cannot. This is the reason why you should have a rooster which is original. Original here means you should maintain the authenticity of this Indonesian laughing chicken. The question is ‘how?’.

Here we go! If you want to have ayam ketawa rooster that can produce melodious sound, you should have the original one by pairing the same type of the rooster and the hens. You should pair laughing rooster with laughing hens. You cannot pair laughing chicken type with another type because it will create the other variety of chicken. From its pure mating, you will get an original ayam ketawa that can produce a beautiful sound. This is the first option when you want to hatch your own laughing chicken (you pair one type of laughing chicken couple, you have the eggs to be hatched).

If you choose to get laughing rooster for sale in the market, just make sure that you get the original one. You should ask its originality from the seller. You should also know its originality characteristics so that it is easier to determine whether the rooster is original or not. There is always plus and minus for each decision you make. You can choose to have ayam ketawa by breeding it yourself or buy it from other chicken breeders. Just choose which one is best for you.

Then, how to encourage Indonesian chicken laughing so they can produce melodious crow? If you already have the original of laughing rooster, the next way you need to do is to stimulate them. You can do it by sounding your ayam ketawa by the sound of ‘ayam ketawa when crowing’ so that they will imitate the voice they hear. You can find the example of ayam ketawa sounds in the funny rooster videos, or laughing rooster audios. Just play it around your laughing chicken regularly, then they will imitate the sound you play. Everything is easy for you.

In addition, ayam ketawa will not be able to produce melodious sound when they are not well treated even though you already stimulate them. This is why you should also take care of them, protect them, and treat them well. You need to clean the cage so that the chicken feel comfortable and healthy. Don’t forget to bathe them routinely as least once in three days. After that, let them dry under the warm sun and hang their cage like in the contest.

Just like a human, ayam ketawa also requires high stamina. To fulfill their need, you can give traditional herbal medicine that you can make yourself. You can try this recipe. The ingredients are honey, ginger, spinach, and tomato. The steps are:

– First, boil the spinach and tomato then chill them.

– Second, blend them and put honey and ginger till mix together.

– Third, after becoming a liquid dough, feed your ayam ketawa by using injection without using a needle. Just open your chicken mouth, and feed them slowly. It will make them easy to gulp down.

In some areas in Indonesia are often conducted a contest for laughing chicken since long time ago. Like in its origin region of Sidrap, South Sulawesi there will be 700 up to 800 ayam ketawa ready for contest. Each judge will assess from the beauty of its sound.

Sometimes, the body posture of the chicken will also be assessed. In the contest of laughing chicken, there is no cage. There is only bamboo or wooden sticks as a place for the chicken to perch and show their ability off. The price of Indonesian laughing rooster that wins the contest can reach 40 or 50 millions rupiahs.

Hearing this amazing numbers, now you can laugh together with this Indonesian rooster. If you want to know directly how amazing and melodious it sounds, just come and see the chicken laughing competition in your city. Get ready to be blown away by their crowing!