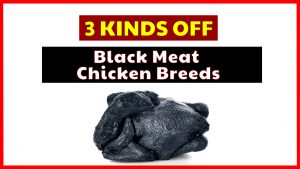 Black meat chicken breeds are always interesting. From many chicken varieties, chicken which has black meat are so special for certain people.

Not only because of the unique appearance, but also the black chicken benefits.

As we know that due to its protein content, chicken meat are healthy for human as long as we consume it in the right way and right dose (not too much).

However, there are more stunning facts about black meat chicken breeds which is said to be more healthy than the general white chicken.

What Are The Types of Black Chicken Breed?

Actually, there are many types of black chicken around the world. They have black feather and also black feet.

So, what kind of chicken that has black meat? Well, here are 3 kinds of black chicken breeds. Let’s discover them one by one!

Kadaknath is one type of chicken which is native to Jhabua district of Madhya Pradesh.

This is one of the rarest poultry breeeds in the world. In its native, this chicken is so popular for its black meat.

The kadaknath chicken is completely black. The plumage is usually black with a greenish iridescence.

It also has black beak, comb, wattles, legs, and toenails. Not only that, the color of the meat, bones, and organs are also dark.

Why is the use of Kadaknath chicken? Well, Kadaknath is one of the black meat chicken breeds that has special medical value in homeopathy and also a particular nervous disorder.

Moreover, the studies show that Kadaknath also has high protein, iron but low fat content. It is also good for suffering from asthma, cardiac disease and other ailments.

Even, the eggs of Kadaknath can also effectively be used to treat severe headaches, headaches after giving birth, faintness, nephritis, and asthma.

The next black meat chicken breeds is Silkie chicken. Now it  is one of the most popular ornamental chicken breeds which people are looking for. Actually, the exact origin of this chicken is still a mystery.

However, according to some sources this chicken is native to China. But now Silkies are kept in other countries such as North America, Asia, and Europe.

Silkies is one of the black meat chicken breeds which is popular with its atypically fluffy plumage which is said to feel like silk and satin.

The breed also has other unusual qualities, for example the black skin and bones and five toes on each foot while the general chickens only have four.

Then, how about the quality of its black meat?

Well, according to Chinese medicine, the black Silkie chicken can help to warm the body and also strengthen the immune system.

Besides, it is also believed to be helpful for women.

It can help to increase female fertility, nourish a pregnant woman’s growing child, and help to restore vitality in women to find they canno get in the mood after childbirth.

Why is it so popular? The really amazing thing about cemani chicken is the color of this chicken.

Cemani chicken is a fibro melanistic breed, meaning it is 100% black both inside and outside. And this is also categorized as one of the rarest breed in the world.

Cemani chicken  is native to the Village of Kedu in the Java Islands. Indonesia. This chicken is one of the most beautiful chicken in the world and very exotic that it is referred to as the “Lamborghini of Poultry”.

They are all black right down from the head to toe, even the skin, meat, bones, and internal organs are black!

But then as a result, people often ask ‘Do ayam cemani chicken lay black chicken eggs?’ Or is ayam cemani eggs black? And the answer is absolutely NO.

Black chicken eggs is just a myth. The fact is they actually lay cream-colored eggs with a slight pink spot. Sometimes it is also brown eggs, similar with general chickens’.

How Much Cemani Chicken Price?

Instead of being consumed, this chicken is popular used as house pet because people more enjoy their striking looks than the black meat quality. But it doesn’t mean ayam cemani meat is not delicious.

The taste is still similar with general chickens. And it also has many benefits which are good for humans health. The exotic appearance, and the high price are two reasons why people don’t want to cook it.

Ayam cemani chicken is too beautiful, and too expensive to eat. For some people, it is better for them to keep it as the house pet and enjoy the stunning looks of it.

Ayam cemani for sale overseas may have higher price because of their rare existence.

Now, after you know information about black chicken breeds that have black meat, are you interested to keep them or maybe consume them?

Although the black chicken price is not cheap, but there are a lot of people looking for black meat chicken breeds.

And you know for sure what their reasons.

So, which one do you prefer, general meat chicken, or black meat chicken? If you are wondering where you have to find black chicken meat, you may find them in Asian store, or other grocery store.

This is a common question usually asked by those who are interested to consume black meat chicken.

You might probably see some restaurants in your area serving black chicken recipe. Dare to eat it?

For example in China where Silkie chicken is native to, many people cook this chicken as soup.

Cooking black chicken is normal here. Not only because it is delicious, but it also has so many benefits for the health.

So, does black chicken taste different?

About the taste, no need to worry. The appearance is indeed black, but the taste is not bad, really not bad.

It is as delicious as the common meat like free-range chicken, broiler, other general chicken.

Once you bite for the first time, you will probably addict to consume it again, again, and again. So, are you now looking for black meat chicken breeds to prove this?