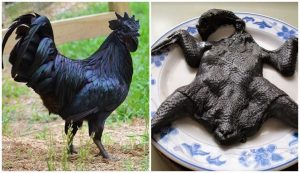 Do you know that there are some species of fowl that contains black color in their bodies? Don’t be confused with black chicken meat.

It does exist. If you are ornamental chicken lovers, the term black chicken is not a new for you.

People in average will only keep black chickens as their house pets. They see black chicken as ornamental chicken which should have really high value to be kept.

However, there is also not few people want to get the black chicken benefits by consuming it.

It has no doubt that chicken is normally consumed by people as side dishes because it has high nutritional value.

It contains calories, protein, sodium, iron, total fat, saturated fat, and many other nutrients. In addition to its nutrition, the soft texture of the meat also become the reason why we usually consume it.

Similar with general type of chicken that is usually consumed (free-range chicken, laying hens, or broiler), black chicken meat also has same nutrition which is good for health.

In Indonesia, there is one type of chicken which has black color. It is ayam cemani chicken.

In In its native, many people choose to keep this gothic chicken as house pets.

Nevertheless, there are also some people who are interested to consume the black meat of this chicken. Let’s see the black chicken recipe of ayam cemani chicken :

Salt and pepper (to taste)

1.Take your cut up chicken pieaces and skin them if needed. Then, put the flour in a large plastic bag. Season the flour with paprika, salt and pepper to taste.

2.Dip black chicken meat pieaces in buttermilk. A few at a time, put them in the bag wiht the flour, seal the bag and then shake to coat well.  Next, place the coated chicken on a cookie sheet or tray, and cover it with a clean dish towel or waxed paper. Let chicken sit till the flour is a paste-like consistency.

3.Fill a large skillet (preferably cast iron) about  to ½ full with vegetable oil. Heat until very hot. Then, put in as many chicken pieces as the skillet can hold.

4.Fry the chicken in HOT oil on both sides. When the color starts to turn into darker, reduce heat and cover skillet. Let cook and continue to fry until crispy. Move to a paper towel lined plate or cookie sheet and place in a warm oven. Repeat with remaining chicken.

If in Indonesia ayam cemani chicken is the popular black chicken, in China there is also a type of black chicken that is usually cooked into delicious cuisine.

Silkie chicken that is also well known as black bone chicken is a breed of chicken from China.

The silkie chicken doesn’t exactly mean that blakc feature but refer to the bone. Even, some silkie also has white feathers but black bone.

In China, silkie chicken is an ideal ingredient for healthy soup.

According to a source, this chicken is originated from Jiangxi Province where this type of silki has been raised over 2000 years.

Half of a whole silkie chicken around 8.oz

Salt and water to taste

1.Wash the black meat of silkie chicken carefully and cut into small chunks after that (around one bite size or size you want)

2.Blend in boiling water around 2 minutes to remoze the impurities. You can also soak it with clean water around 10 minutes.

3.Soak the dried small shitake mushrom in boiling water for around 10 minutes. Wash out.

5.Pour enough water in the pot just cover the chicken meat. Bring all the content of the pot to a boiling and turn down the fire to simmer for around 40 minutes.

6.Turn off the fire and add 2 tespoons of salt or to taste as needed.

Besides cemani chicken, this chicken is also one of the rarest poultry breed of India which is native to Jhabua district of Madhya Pradesh, India.

The kadaknath chicken breed is popular for its black meat quality, texture and also taste.

Let’s see what kind of cuisine that can be made from this  black chicken.

2.Fry the whole spices in oil. Saute onion until golden brownm and then add the ginger-garlic paste and cook briefly.

3.Add in the tomatoes and slit green chilies and cook well, then add in the coriander, turmeric and cumin powder and then cook briefly.

4.Add in the marinated Kadaknath chicken and bring it to a boil and let it simmer for 2 up to 3 hours on low heat stirring occasionally and adding adequate water periodically.

5.Add in the crushed black pepper towards the end and finish with chopped coriander leaves.