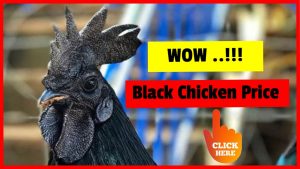 Black chicken is identical with exotic creature. For some people, they think that the black chicken price is more expensive than the general chicken. There is one type of black chicken that is claimed as the most exotic and unique in the world, which is ayam cemani. Let’s see…

How Much Is a Black Chicken?

Ayam cemani chicken or cemani chicken is native to Temanggung, Central Java, Indonesia. This chicken is very well-known for its exotic black. Its beauty and exoticism has made this chicken known as the gothic chicken – ‘The Lamborghini Of The Poultry’ in the world. The feather, beak, eyes, tongue, legs, toenails, bones, and its internal organs are black, like ayam cemani meat. Although almost all of ayam cemani’s body are black, there are two things that the color are not black. That is ayam cemani’s tongue and ayam cemani’s egg. So, although ayam cemani is black, they are not provide black chicken eggs.

In Indonesia, this black chicken price is more expensive than the general chicken. The price of ayam cemani chicken is around Rp150.000 to Rp700.000 for one chicken.

Cemani chicken is actually native to Central Java, Indonesia which is known as ‘Ayam Cemani’. Although ayam cemani is from Indonesia, but its existence also exists in other countries like in USA. In Indonesia, the price of this chicken is not as high as in USA as you can read in the previous section. The jet-black ayam cemani chicken is totally unique that Florida-based breeder named Paul Bradshaw started selling this chicken for $2,500 each in 2013. See… that is a really fantastic price, isn’t that? As you see, black chicken price in USA, exactly in Florida the price is so really high. So, no wonder why people call it as most expensive chicken in the world.

As stated in above that cemani chicken is not the only one black chicken. In India, there is one fowl species that also has completely black color. It is Kadaknath. This chicken is an Indian breed of chicken local to the Madhya Pradesh area in India. If you see more detail, there is black plumage with a greenish iridescence on it. Its legs, toenails, beak, tongue, comb, wattles are also black. Even, this chicken also has black meat, bones and dark organs.

This dark meat is prized and priced highly for its low cholesterol, low fat, and also low protein content. So, how much is kadaknath chicken price? This fowl currently goes for Rs2,000 to Rs2,500. And then, the Kadaknath chicken meat in India is sold between Rs700 – Rs1000 per kilogram.

Silkie chicken is a breed of chicken which is native to China. It is named so for its atypically fluffy feathers which is like silk and satin. Even though not as quite as black as Ayam cemani chicken, but this chicken has black flesh and bones. The silkie chicken price costs from around $20 to $120 per fowl.

Besides, silkie chicken is suitable for kids. They are cuddly, fluffy and tolerant, love sitting in your lap and even will enjoy hug. They are also very friendly, calm and docile. Thus, if you have children, this chicken is really suitable.

Is Black Chicken Good For You?

Well, centuries ago, Chinese eat black chicken as the medical purpose, and it lasts till now. And nowadays, black chicken is really popular around the world, especially in Asian countries.

According to a research, black chicken contains full of antioxidant which is good for humans health. It helps to keep health, prevent sickness and also common colds. The carnosine contained in the black chicken meat is also good for muscles and nervous system. Moreover, it also offers higher levels of irons, minerals, vitamins, and nutrients that usually present in regular chicken.

Due to the black color of the meat, many people find the black chicken to be an odd food and tend not to consume it. Besides, some of black chicken price is also quite expensive that makes people feel so pity to consume. Nevertheless, consuming black chicken is good for our health. For example ayam cemani meat.

So, if you as whether black chicken good or not for you, now you know the exact answer. In addition to keep it as your house pets, you can also consume their meat for your health. So, do you want to consume black chicken? Or if you are looking for black chicken for sale, you can try to find it in a breeder around you.