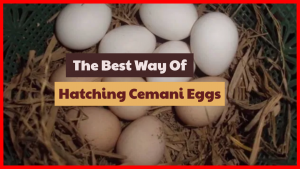 During raising cemani chicken, you will find a moment when your pet entering the period of laying eggs. At that time you can hatch the egg in manual ways or modern ways using a hatching machine.

Hatching eggs using manual or modern ways need some points that you should know. It can give effect to the process of your hatching eggs. Wanna know what factor that can cause your hatching cemani chicken eggs or other eggs process to go successfully? But before that, we will show you a glimpse of Cemani Chicken.

As we know, Cemani Chicken or Ayam Cemani is popular with a black color which almost whole body. Except part of the tongue is white or grey and red blood. This chicken is indeed popular in public, especially for the ornamental chicken lovers as a collection.

Ayam Cemani is a type of ornamental chicken originating from Indonesia, more precisely in the area of Central Java Temanggung. This ornamental chicken has a unique characteristic that is all black color ranging from feathers, comb, head, beak, body, rectum to the feet are also black. It looks exotic and unique look of his body, so no wonder if this chicken has a lot of enthusiasts in Indonesia even to foreign countries. Because it is much-liked and its stock is scarce abroad, Ayam Cemani price becomes high. Even being one of the most expensive types of chicken in the world.

But, almost a whole body of this chicken is black, are ayam cemani eggs black? Let’s see about ayam cemani egg color. Is it black or the same like the chicken’s egg in general?

How About Cemani Chicken Meat Taste?

After you know the little explanation about ayam cemani, let’s see about ayam cemani hatching eggs. Knowledge in the hatching process is very important. The action of buying a hatchery machine without learning the good hatching process can be impact failure in the process of hatching chicken eggs. In hatching chicken egg is very important to distinguish the eggs contained embryos are both alive, empty and dead. Distinguish the presence or absence of embryo done at the time of observation (candling). The observations vary by 2-3 times. In general, you can finish the observation about 2 times on the 4th day and 3rd days before hatching. On the fourth day, this is the phase which embryo in the egg has passed a critical period of early embryonic formation.

These Kind of Eggs:

In the 2nd observation done on 3 days before hatching, the dead eggs are subsequently removed so will not make a bad smell on the hatching machine. As easy tips to see or binocular eggs can use dark room and dark colored paper roll. For easy, you can also use the flashlight on your mobile phone.

Factors That Must be Considered In Hatching Eggs

Indeed there are several factors that can determine whether ornamental chicken eggs hatched or hatched failed, among others:

In hatching eggs, time does determine whether or not a hatch succeeds. Time for hatching is enough to affect such as weather or season. Eggs that are hatched during the rainy season tend to require a warmer place to hatch. Conversely, in the summer season, eggs tend to require a room whic is not so warm so  the eggs are not too hot so the percentage of success in hatching is bigger.

In addition to the time and temperature of moisture hatching is also necessary to note, humidity should be in accordance with the development and growth of embryos. Common temperature humidity is about 60-70%. In addition to affecting the development and growth of embryo, moisture also affects the process of calcium metabolism (Ca). When the relative humidity (water vapor) is too high it causes calcium displacement of the bony spine in embryo development. So that the rate of embryo growth can be slowed by the state of the air humidity either too high or too low. Maximum embryonic growth will occur at approximately 60% moisture. Until the eighteenth day the required relative humidity is 60% and the next day is 70%. You can adjust humidity with giving water into the hatching machine and put into a flat container.

In normal embryonic development, oxygen enters and releases carbon dioxide through the pores of the eggshell. In the hatching machine should be enough available oxygen. If in the eggshell there is dirt will inhibit the gas of oxygen and carbon dioxide, so carbon dioxide levels will increase 0.5%, while the oxygen level will decrease by about 0.5%. Increased carbon dioxide is too high to cause the hatchability of the egg will be reduced. An increase of 1% will cause the death of the embryo to increase. A larger increase of 5% of embryos will die before hatching. Indeed in the hatch period each poultry is different. The larger the poultry posture the greater the eggs produced and the longer hatching period. Usually for hatching chicken eggs takes approximately 21 days.

Factors that are not less important in influencing the success or failure of a hatch is the quality of the machine itself. With the intent of whether all components in the hatchery can still function properly or not. Because it can also affect success in a hatchery.

We always say to our customer who wants to order ornamental chicken, if the eggs that we send are not our assurance. We or you can also predict the eggs are males or females. So also when the delivery, egg-like risk of shocks that make the eggs become cracked and broken is already beyond our reach. But did not rule out also the eggs that we send can hatch perfect. We’ve had enough of our successful customers to hatch a variety of ornamental chicken eggs ordered from our premises.