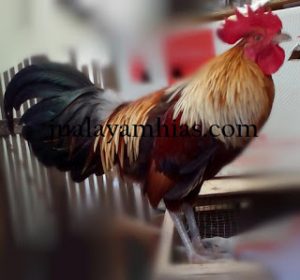 Don’t claim yourself as fancy chicken lovers or fancy chicken breeders if you do not know about ayam ketawa. Yeah, in this article we are going to discover the amazing primadonna chicken which is so popular with its unique sound of laughing. Because of its ability to produce beautiful sounds of laughing, this chicken is called ‘laughing chicken’. Furthermore, we will be going to discover the hen’s ability to hatch their eggs or ‘ayam ketawa hatching eggs’.

Ayam Ketawa which is known as ‘Laughing chicken’

It has no doubt that if you are asked to have a special chicken with a unique sound, you will choose ayam ketawa as the first option. Why? Because this chicken is so popular with the laughing sound that will definitely hypnotize you. Therefore, it is no wonder if there are a lot of people from many area holds a competition for this chicken.

Ayam ketawa or ‘laughing chicken’ is a kind of chicken which is originally from the area of Sidenreng Rappang in South Sulawesi, Indonesia. Yeah, it’s true that this chicken is an Indonesian chicken. This is one of some breeds of long-crowing chicken prized for the clarity and the unusual length of the crows. As we mentioned above, the crow is like the laughing sound of human but not really similar actually. It has an unusual characteristic with the length.

The Governor of Sulawesi Cup considers ayam ketawa or ‘laughing chicken’ as a symbol of courage, social status, and the heroism. Ayam ketawa breed was originally held as a status symbol of the Buginese royal family, but it has entered into the higher popularity recently since the fall of the monarchy. And now, this chicken usually takes part in the contests for the perfect crow.

People in Indonesia usually call Ayam ketawa with the name of ‘Ayam Gaga’ while Buginese people usually call it Manu’ Gaga’ or sometimes just Gaga’. The breed of this chicken is widespread throughout many of Indonesian regions. This is why Indonesian usually conduct the contest for special crowing or laughing contests of ayam ketawa. The winner of the contest will probably reward his owner with a trophy or other prize. If the size of the competition is a quite high level, the winner can bring million rupiahs.

Now the question is, do all of Ayam Ketawa can produce laughing sound both the rooster and the hen? This is the basic question you should know when you are planning to have this ‘laughing chicken’. Ayam ketawa that can produce beautiful laughing sound is only the rooster while the hen (ayam ketawa hatching eggs) cannot. And this is what we are going to discover one by one. First, we will discover the ability laughing rooster of producing very beautiful sound. And the second, we will discover the ability of ayam ketawa hen of hatching eggs.

Different with ayam ketawa hatching eggs, we can obtain hundreds of thousands to millions of rupiah when we sell the type of ayam ketawa rooster. In many areas of Indonesia, it can be a serious business. The appearance of the laughing rooster looks like the general one but when they start crowing, you will realize how amazing the sound is and how just special it is. For the best type of this chicken, it supposedly can produce the sound which reaches almost one minute without breaking.

To produce such amazing sound, of course, it needs a kind of training. The owner of ayam ketawa rooster should train them to make this special sounds. Do you know why? Because their sound of the laughing cocks is the asset of pride for the owners. Besides being trained, don’t forget to pay attention to the foods, the environment, the cleanness, the treatment, and so forth. This will automatically encourage the chicken to grow well and produce beautiful laughing sound.

Generally, there are two types of laughing rooster in Indonesia The tempo of the laughter is what makes it different. They are the slow type crows with a drawn-out staccato of four until twelve guffaws at a time, and the dangut laughs like a machine gun-like way. The second type (the dangut sound) is usually more expensive. A group of judges will analyze and score their laughs depends on the sounds.

If you are an ornamental chicken breeders, ayam ketawa hatching eggs are your good prospects. But don’t forget that you should also have the roosters to breed ayam ketawa eggs. If you run this business, the opportunity can also be good. We know exactly there are many people from different areas in Indonesia are interested in Laughing rooster. This can open a new opportunity if you can provide such type of laughing chicken with good quality.

In one period, ayam ketawa hen hatch eggs about 8 up to 15 eggs. However, the first up to the third eggs usually do not have high hatch-ability compared to the fourth eggs. It is because of imperfect fertilization of the egg that doesn’t produce an embryo. The embryo can be found from the fourth eggs till the last. To overcome this case, we should feed ayam ketawa hen with good quality food to support the fertility period or spawning period so that the hen can lay eggs smoothly.

To increase the egg productivity, we can also hatch the eggs without ayam ketawa hen. In this case, ayam ketawa hatching eggs will only have a role to spawn only. They are not going to hatch their eggs because we can use ‘battery cages’. This system is popular used primarily for egg-laying hens. For the preparation, we can provide battery cages which are wide enough for both Ayam ketawa rooster and the hen. The floor of the cages should be sloping so that when the hen is laying, the eggs will be rolling in the lower place. It will make us easy to take the eggs from the outside. Don’t forget to put a kind of spoon or something soft to hold the eggs when rolled.

There are two methods to hatch ayam ketawa eggs. First, we can use the hatchery machine or incubator. The treatment of using incubator can be like ayam cemani hatching eggs. And the second, we can use other chicken hens which is still hatching the eggs. You can choose which is better for you. Each system, either hatchery machine or hatched by other chicken hens have different advantages or disadvantages.

Just for your information, when we use hatchery machine, we do not have to prepare other chicken hens to hatch the eggs. Besides, we can also adjust the eggs productivity with the capacity of the machine. However, hatching eggs using incubator needs more experience and knowledge. We need to set the temperature and the humidity. As we know that the temperature and the humidity in one area can be different with another.

Some people may consider using the second method using other chicken hens to hatch the eggs. Allah The Almighty has already prepared everything to facilitate us. We can use free-range chicken or another type of chicken to hatch the eggs. This method is easy to implement but doesn’t mean without obstacles. As we mentioned above, each method you choose has different treatment. Each people will have different insights towards them.

If you are going to breed ayam ketawa hatching eggs, there are several things you should consider. The same thing also happens when you choose to have a  laughing rooster for competition only. What is discovered in this article is just some of them. For more information, you can follow our fanpages: hobi ternak or our instagram: hobi_ternak.