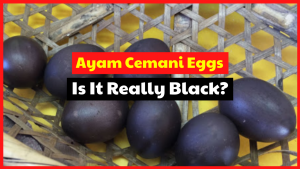 However, is it true? But before we reveal the mystery, let’s discover about ayam cemani chicken!

Indonesia has many interesting phenomena start from the myths, legend, until the factual phenomena.

In Central Java, it still remains a myth about the black eggs of the black chicken.

This chicken is widely known as cemani chicken, an exotic chicken which is native to Indonesia, exactly in Central Java.

Cemani chicken is popular with the exotic jet black color in his body. Not only in the feather or outside the body but also inside the body. From head to toe, everything is black.

The feather, beak, eyes, skin, nail, meat, bones, until the internal organs are black. This is why this chicken is also known as gothic chicken.

Well, cemani chicken is very well-know for its exotic solid color in all of the body. From beak, head, eyes, feathers, leg, skin, everything is black! So, no wonder why people also usually call it ‘The Lamborghini Of The Poultry”.

It is black inside and outside, from the head to toe, even its bones, meat, and internal organ are black. Due to its uniqueness, this chicken is categorized as the rarest chicken in the world.

Ayam cemani chicken is popular with its exotic solid, jet-black color inside and outside. This unique black color finally causes a rumor which says this chicken also produces black-colored eggs.

The worse is, people then believe that the ayam cemani chicken eggs can bring fortune to the owner. But, are cemani eggs black?

Ayam cemani chicken eggs are not black. Even, there is nobody who can prove that chicken black eggs exist.

So, What Color Are Ayam Cemani Chicken Eggs?

Similar to the other general chicken, cemani chicken lays eggs with normal color.

Even though Cemani chicken is black at all but it doesn’t mean they can produce black eggs.

According to a source, the genetic condition of fibromelanosis that causes the black color in chicken’s body cannot reach the eggshell. As a result, the color of the egg will not change into black.

Moreover, in the process of hatching, ayam cemani egg yolk which is yellow will start to change in the black color when the embryo of cemani chicks appears.

This transformation happens inside the eggs so that the eggshell is still in the normal condition. Well, this phenomenon shows that the egg is in good quality so it will then grow as chicks and is able to hatch.

Why Are Ayam Cemani Black?

The color of cemani chicken is the reason why people name it so. Then, what does ayam cemani mean? Well, the word ayam means chicken in Bahasa Indonesia.

While the word cemani in Javanese means completely black. From the name of this chicken, it shows what Indonesian do know about this chicken is ‘its beautiful black color’.

The black color of cemani chicken is a rare phenomenon. The genetic condition called fibromelanosis causes this rare coloration.

It causes hyperpigmentation in the chickens which makes the appearance of cemani chicken become totally black.

Actually, there are more reasons that make this chicken is so worth it. And the beauty of cemani chicken which is rare and unique is only a reason why ayam cemani price is quite expensive.

How Much Are Ayam Cemani Chicken?

Not only known as an exotic black chicken, but ayam cemani chicken is also claimed as the most popular chicken breeds in the world.

So, no wonder if not only Indonesian who keep them or cultivate them but also people around the world.

In Indonesia, this black chicken price is more expensive than the general chicken. It is priced around Rp150.000 to Rp700.000 for one chicken.

However, in other countries, the price of ayam cemani chicken for sale is much much much higher. The price is so high because Ayam cemani is categorized as one of the most expensive chickens in the world!

As a proof, this jet-black ayam cemani chicken is totally unique that Florida-based breeder named Paul Bradshaw started selling this chicken for $2,500 each in 2013.

Hopefully, you are not confused and ask questions again about the true color of ayam cemani chicken eggs.